After a month on the road – travelling for work in Europe – I stood on the start line with some trepidation. It was some 6 weeks since my last race, guiding Jason Dunkerley in the United Airlines New York City Half Marathon, and some 2 months since my season opener at the NYRR Washington Heights Salsa, Blues and Shamrocks 5K. I was in no man’s land with little idea what to expect. I need not have worried.

With Sham away in Bangladesh – she flew out of T4 JFK on Thursday, three hours after I cleared immigration at T8, and we had 15 minutes together curbside at T4 – my usual prerace routine was also out of the window. Instead of driving in, parking at Marcus Garvey Park and then running to the race start as a warm-up, this time I caught the train in, stepped off at Harlem 125th Street Metro North and then ran to the start. I was also missing a photographer and an editor for this blog (hence few pictures and many typos).

Warming up I felt like I was over jet lag. There was a spring in my step. I’d also lost a few lbs while away, like I had in the build-up to the 2017 London Marathon. I ran and walked almost 5 miles as a warm-up, the last few miles with team mate Falvio De Simone who had recovered well from Boston and was in saerch of a PR. Shortly before the start fellow team mate Jordan Wolff appeared: I had a UA singlet to lend him.

The starting corral was packed. The invited elite runners included Laura Thweatt who is also coached by Lee Troop and who headlined at the NYRR Run Talk on Friday evening taht I attended. The local field was loaded. NYAC were out in force. I lined up amidst their posse.

And the gun was off. Barely 400m into the race I noticed just up ahead a phalanx of elite women with Laura leading the way. I figured I’d try to keep them in my sights as long as possible and, hopefully, run with my new team mate Askale Merachi. I clipped through the first mile, taking in Cat Hill, in 5:17 and caught Askale around the two mile mark with the clock reading 10:30. I hoped Askale would come with me but she was slowing, perhaps saving herself for an upcoming marathon. I was following the playbook.

The third mile proved, as expected, to be the toughest as it takes in the Northern Hills. On a counter / anti clockwise loop like this that means a 400m descent past the Harlem Meer, a 600m climb up to near the summit of the Great Hill, Central Park’s highest point, and ending with a 400m descent. I passed three miles in 16:05 and half way in 16:32, 3 seconds faster than I ran the Washington Heights 5K. I was shadowing Brent Frissora, someone I’d often traded strides with. Aside from Brent I spent most of the race isolated. 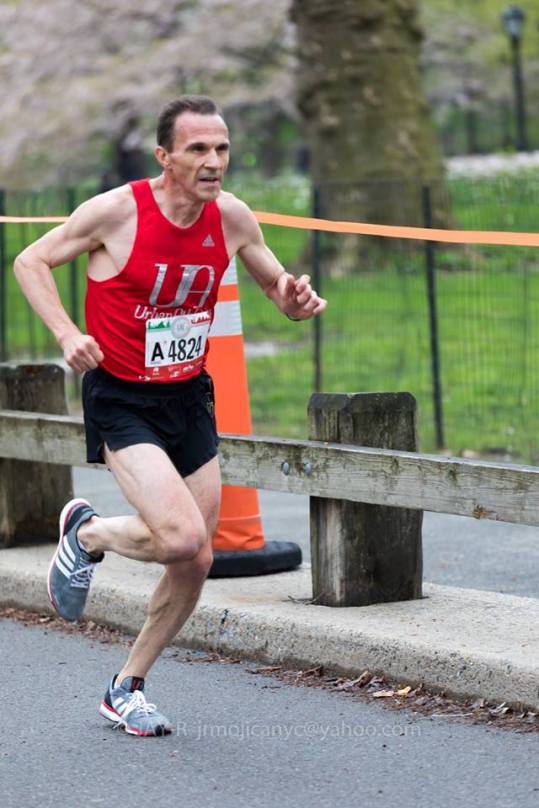 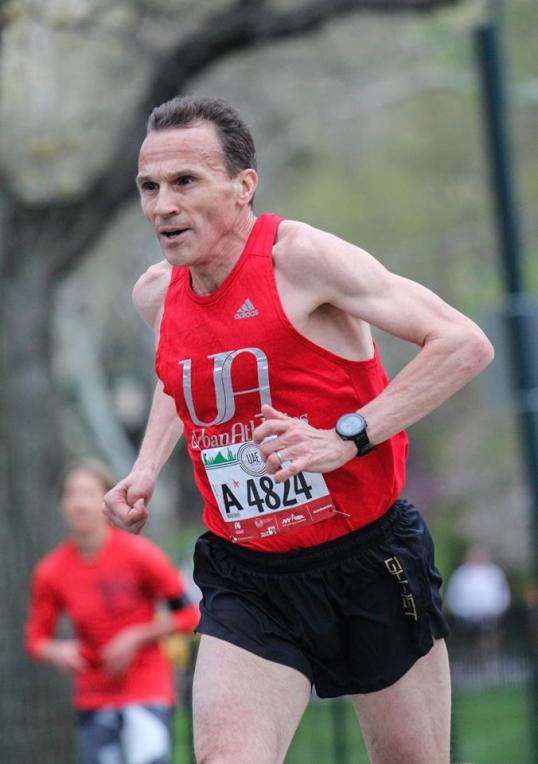 The fourth mile was no easier. Heading south down the West Side Drive it rolls with more climbing than descending. I covered the 4th mile on 5:27, reaching the four mile mark in 21:20. The fifth mile is possibly the fastest of the course as it descends for around 800m to Strawberry Fields. I passed Brent and then passed the 8K mark in 26:32 and 5 miles in 26:50. In 2017 I rocked the final mile chasing Natosha Rodgers. This time I simply clung on. Brent overtook me. I climbed up the final 200m incline as though it were the north face of the Eiger. 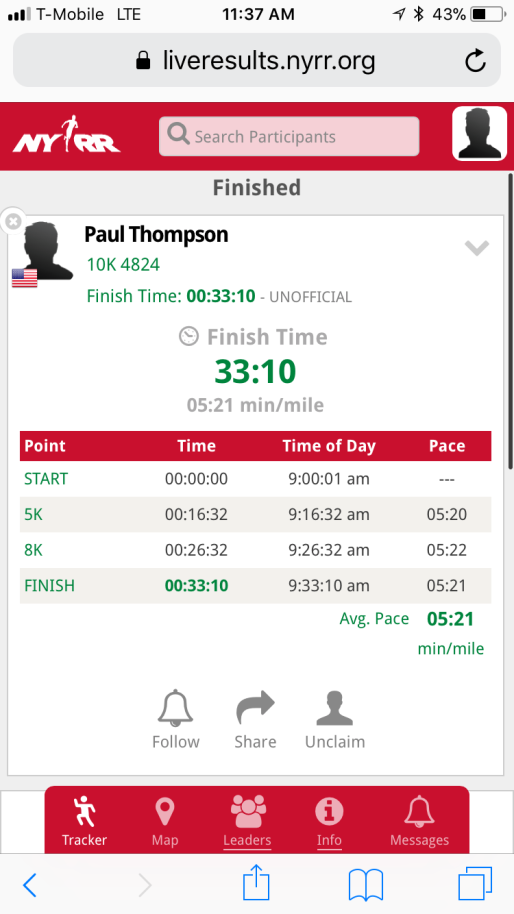 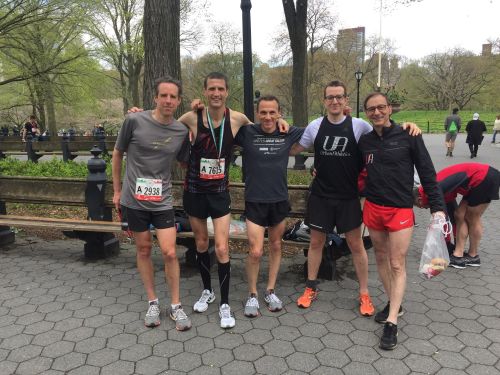 Over 7,400 runners finished according to NYRR’s race report. Rhonex Kipruto lowered the event record by 27 seconds, crossing the finish line in 27:08. That time is also the fastest road 10K ever run in the United States. That would make it arguably the best 10K road performance of all time. By an 18 year old. The women’s race provided another exciting finish, as 2018 United Airlines NYC Half champion Buze Diriba of Ethiopia once again used her fast finishing kick to win, this time in 32:04, passing compatriot Aselefech Mergia in the final 200 meters. Laura Thweatt came 4th in 32:22, a 10K road PR. New UA team mate Askale came 6th in 33:59.

So all’s well that ends well. My month on the road ended well. My running routine had gone out of the window. I ran at different times, in different places, at different paces and mainly alone. But I had the constant support and guidance of Troopy.

I was not short of variety of weather and places to run. The weather ranged from wet and 40s F to sunny and high 70s F. I ran through villages near my home town with brother Stephen, in London’s Hyde and St James’s Park with friend Mo’ath Alkhawldeh (I watched him run the London Marathon a few days later), in the grounds of Schloß Schönbrunn in Vienna, in Richmond Park in London, and in the Bois de le Cambre, Parc de Bruxelles and the Sonian Forest in Brussels. Most of the time I felt like I was going through the motions. But during last Wednesday’s early morning 13 miler, where I got lost and scrambled to get back to the office in time for a meeting, I ran some 5 miles at close to 6:00 mpm pace. This was the acid test. I was ready to rock.

Continuing our travels in Europe we headed east to Innsbruck after our two days in Salzburg. Paul had spent some time there about twenty years ago and highly recommended a visit to this city. At an altitude of 560m (1837 feet) Innsbruck is the capital of the federal state of Tyrol.

Searching on TripAdvisor convinced us to book a few nights with Romantik Hotel.  It was close to the rail station, centrally located and had good reviews, particulary for their healthy breakfast buffet and unique rooms, including a Versace Suite and a Swarowski Crystal Suite (we did, as it happens, visit the Swarowski museum). We were going to be there over my birthday so I thought a hotel with a bit of character might be interesting. 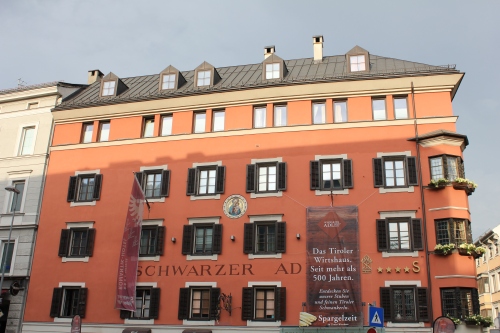 Like several of the cities we had visited, the most obvious running routes were along the banks of the river, in this case the River Inn.  We did a few runs along the river accompanied by spectacular views of the alps surrounding Innsbruck.

I decided that a good way to celebrate turning 50 was to run in the Tyrolean Alps. The day before we had riden up the Patscherkofel on the other side of the valley and taken a short hike. But today I wanted to go one better by riding up the Nordkette and, if possible, running down some or all the way! Down rather than up as we felt we needed gravity’s help. 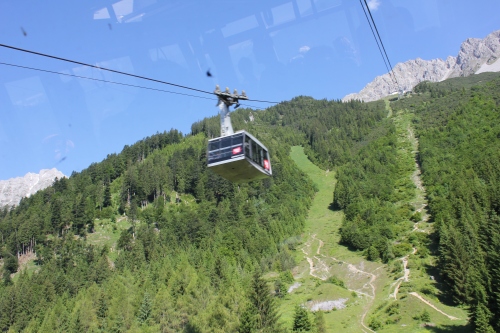 The Nordkette are just a 20 minute ride away from the city centre on the Hungerburg Funicular and Nordkettenbahn (cable railway). Planned and designed by Zaha Hadid the funicular marries futuristic design with alpine motifs . 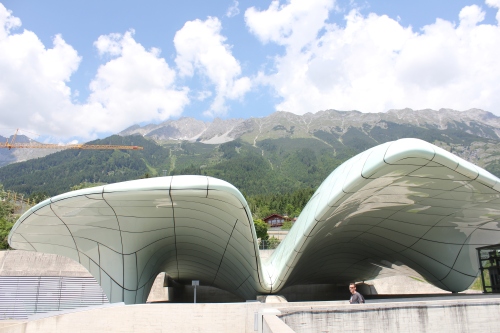 So we rode the funicular and cable railway, in two stages, all the way up to the 2256m (7729 feet) high Hafelekar, did a short hike to the nearest peak of Hafelekarspitze, took the cable car back down to Seegrube at 1905m (6350 feet) and then drew a deep breath for the descent to Hungerburg. The descent looked feasible – there was a service road that tracked the cable car route. Paul suspected the legs might regret. They did.

While on the peak we spent sometime soaking up the thin air and jaw dropping views of Innsbruck and the 360 degree mountain panorama. The air was so thin Paul got tempted with the idea of doing the World Masters Mountain Running Championships in the nearby Stubai. 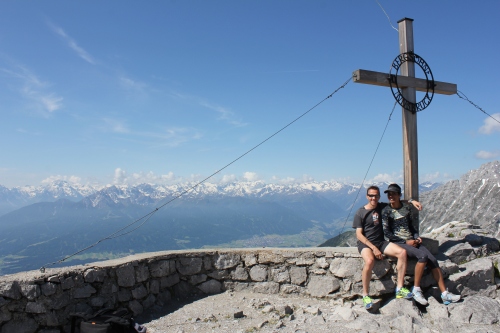 I knew Paul would be a lot faster than me, in spite of carrying a bag, so we agreed to meet at the Hungerburg station. The start was steep and stony. Being a novice mountain runner I started nervously. However, I surprised myself by staying upright and quickly settled into a steady rhythm. And the early twists and turns gave way to long straight stretches.

I wasn’t breaking any speed records but I was gaining in comfort, confidence and competence. After about three miles my quads started to feel sore but nothing that would make me stop. After around four miles I came across Paul who had done a detour. We continued down together for a bit. A wrong turn had us going uphill at one point, convincing me down was the right choice.

Eventually the destination came into view. Not before time for the legs and lungs. All in all we covered around 8 miles and some 1200 metres of descent. While pleased to have been able to get down in one piece squatting and walking proved painful for a few days. The quads were beat. Paul, on the other hand, felt the strain in his gluts. You can tell who was doing the the constant braking.

To celebrate my birthday in a more relaxed manner we went had dinner at Alfred Miller’s Schoneck restaurant. The food was excellent as was the service.  Our table had been decorated with roses and sparkles as Paul had tipped them off that it was my birthday. And the final touch was a little cake with a sparkler candle, like a stick of dynamite, and glasses of champagne on the house. All in all it was a memorable way to celebrate turning half a century! 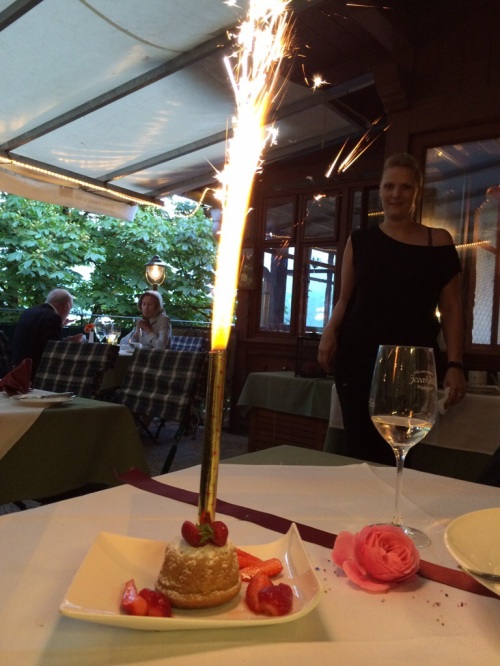 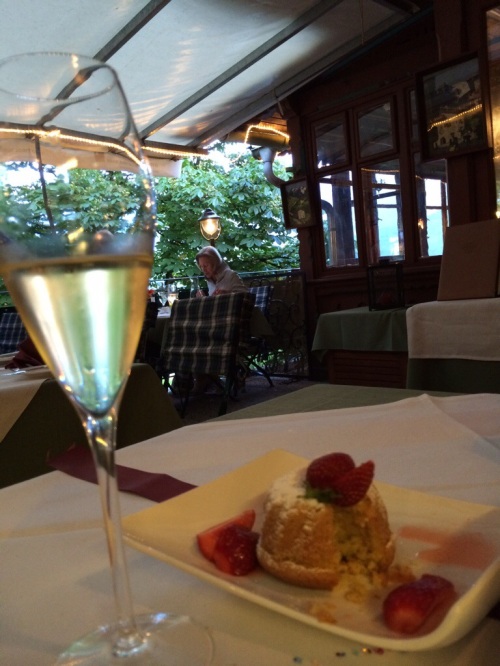 After visiting and running in Vienna, Budapest and Bratislava the next stop on our train tour of central and eastern Europe was Salzburg. A regional commuter train got us from Bratislava to Vienna and a Railjet no less, operated by Österreichische Bundesbahnen (ÖBB), ‘flew’ us from Vienna to Salzburg in barely two hours. Would the hills be alive with the sound of running footsteps?

Sham couldn’t remember if she had been to Slazburg  – in spite of being a The Sound Of Music fan – but her sister swears they were there 20 years ago.  If her sister was right it had clearly failed to leave much of an impression on her. A short early evening run soon after checking into the hotel, a Mercure chosen due to its proximity to the station, suggested it ought to have left a big impression. 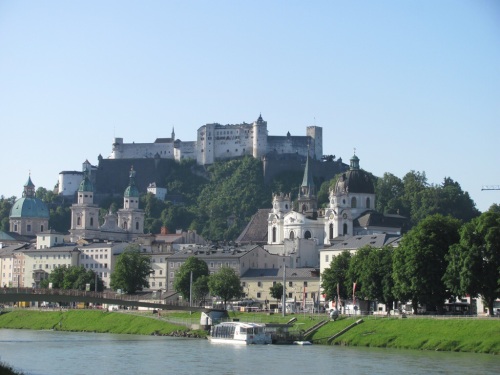 I ran on the cycle path along the river and then passed through the old town. The town was jaw droppingly gorgeous: historic, quaint, green, Austrian. And an imposing fortress provided a breathtaking backdrop. Again I had to dodge bicycles. It felt like it was only a matter of time before I collided with one. 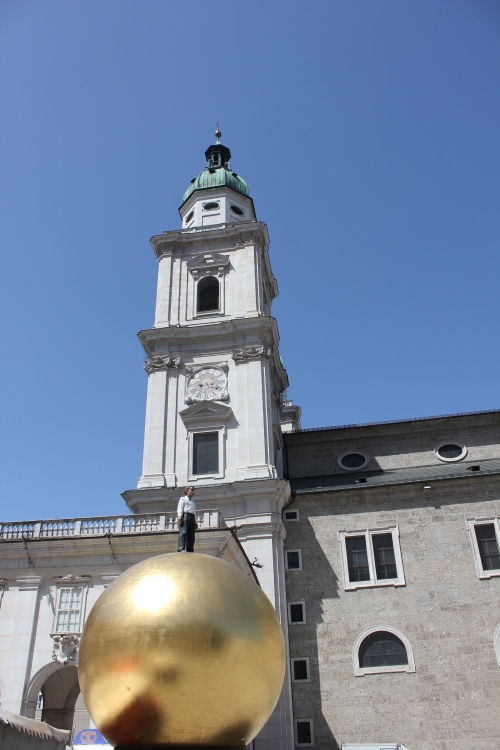 We spent a day chilling out – Viennese breakfast in a river side cafe, watching a classical orchestra in the Mirabelle Gardens, ambling through the old town, touring the castle and ending with dinner at  S’Kloane Brauhaus (brewhouse – my German vocabulary was fast expanding). 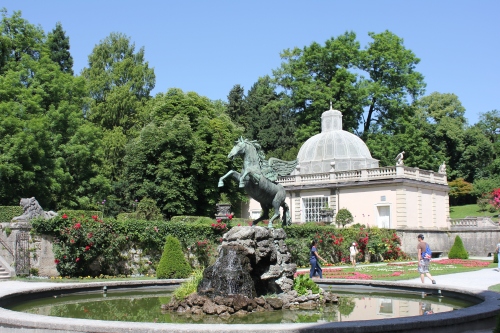 The fountain at Mirabelle Gardens which was featured in The Sound of Music. 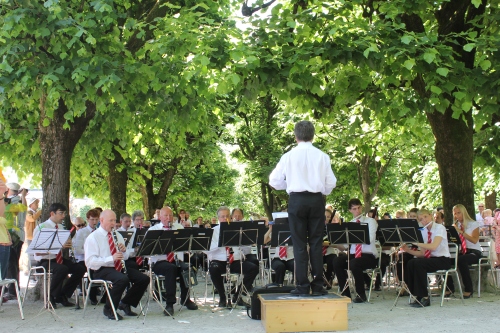 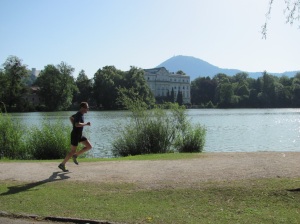 Running around the lake with Schloss Leopoldskron in the background.

On the morning of our day of departure to Innsbruck, Sham instigated a long run out to another place made famous by The Sound of Music   – the Schloss Leopoldskron. Our ten mile run offered much variety – river, old town, tunnel under the castle, lake and meadows. There is no doubt we will remember this visit to Salzburg. But Sham is still unsure whether it was her first or second visit. 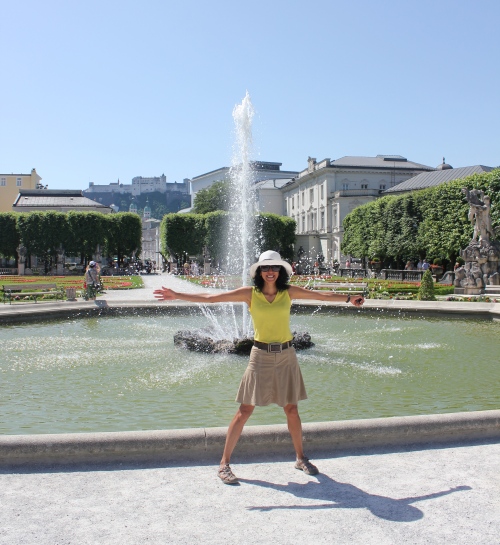 Joy at being in Mirabelle Gardens.